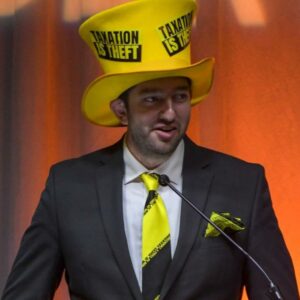 Dan Taxation Is Theft Behrman is an international speaker, promoting the ideas that Taxation Is Theft, that individual freedom is paramount to the government, and that we are not government property. He has worked in the entertainment industry in Los Angeles, and the tech industry internationally, from startups to fortune 500 companies. His most admirable strength is the ability to solve complex problems with minimal disruption to all parties involved.

Dan has dedicated a lot of time to many non-profit organizations. He has supported the Libertarian Party and dozens of their candidates with training and resources. He has also worked with the Sea Save Foundation, a Santa Monica, California based international ocean conservation organization. Currently, he is supporting Students for Liberty Uganda and many other African freedom-based initiatives, with resources and guidance.

He is a supporter of free markets, individual rights, environmental and social issues, and has delivered this message to 6 continents, empowering people in some of the world's most impoverished nations. He has smuggled insulin from Mexico to the US to help diabetics in need, who are victims of big pharma's corrupt partnership with government.

As a digital nomad, he ran his 2020 presidential campaign from Cancun, Mexico. He believes that all human interaction should be voluntary, including with their own governments, so that humans can be free from the coercive nature of abusive taxation and regulations.

He is running for governor because he believes that the government belongs to people, and we are not government property, and that these ideas are almost completely unrepresented in popular politics.. The purpose of government is to protect our rights, not to force us to live our lives in any particular way that a simple majority has deemed preferable. Any person should be free to live their life however they prefer, so long as they don't hurt others and don't take their stuff.

Does he really believe that taxation is theft?

There are two things to consider when talking about taxes. The first is necessity, and the second is morality.

Necessity asks if it is absolutely necessary to both provide all of the government services, and is it necessary to tax to pay for them. Because there are so many different services, it's difficult to list them all out, however, Dan has created a ton of content on YouTube and Facebook, and is actively discussing alternative solutions on Those platforms as well as Instagram, Twitter, and his blog and podcast.

Morality asks the question if it is theft. By its very definition, it is theft, and this can not be disputed. If you don't pay, they will take it. If you try to hide it from them, they will arrest you. If you resist, they will hurt you. Theft is taking property which is not yours by the use of force or the threat of force. That is exactly what the government does every day to millions of people.